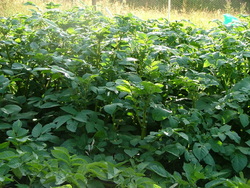 Potato Patch- We trialled different ways of preparing the soil to grow potatoes. We grew many different cultivars and therefore the trial was not a comparable scientific one, but we hope to do directly comparable trials in the future. However despite this there were significant differences in the yields obtained.

1 Potatoes planted straight into the turf - The grass was so vigorous that the potatoes couldn't compete and slugs, hidden by the long grass, were a significant pest. Yield was significantly less than with the other methods.

2 Top few inches of turf inverted, no mulch - Inverting the turf was hard work but quickly gave a nice clean patch of soil. Due to the cleared land the potatoes got off to a good start before weeds got a chance to become a problem, and their thick canopy of foliage was self mulching. We suspect that early in the season plants would have benefitted from a mulch, until the canopy developed to retain available moisture.

3 Inverted turf and mulch - Turf from elsewhere was inverted and placed on an existing nettle patch and topped with layers of newspaper and well rotted manure. A metal bar was used to make holes about 25cm deep into which we pushed the seed potatoes, before covering them with a handful of soil. This method produced the highest yield but also involved higher initial inputs of labour and materials.